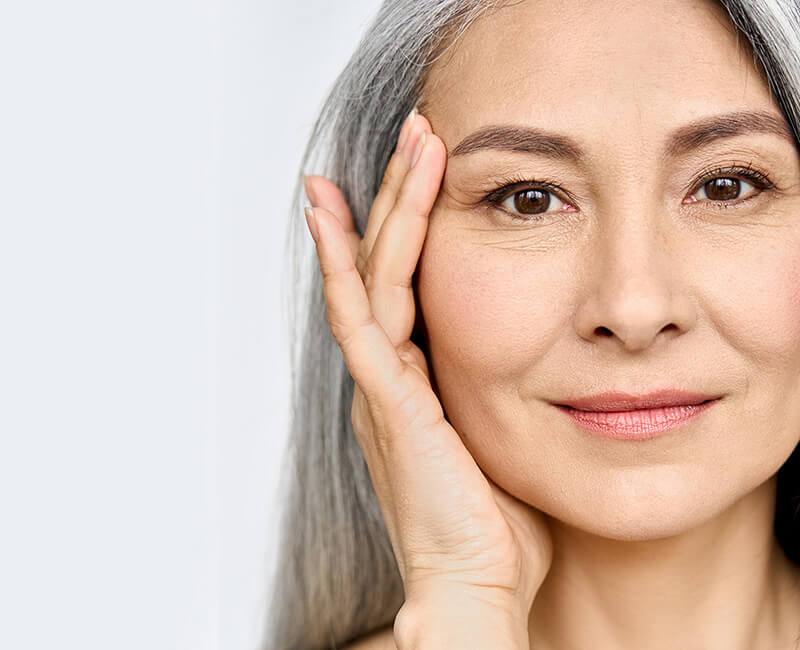 If You’re Considering a Brow Lift…
A forehead lift or brow lift in Raleigh, NC, is a procedure that restores a more youthful, refreshed look to the area above the eyes. The procedure corrects drooping brows and improves the horizontal lines and furrows that can make a person appear angry, sad or tired.
In a brow lift, the muscles and tissues that cause the furrowing or drooping are removed or altered to smooth the forehead, raise the eyebrows and minimize frown lines. Your surgeon may use the conventional surgical method, in which the incision is hidden just behind the hairline.

If you’re considering a brow lift, this web page will provide a basic understanding of the procedure — when it can help, how it’s performed and what results you can expect. It won’t answer all of your questions, since a lot depends on your individual
circumstances. Be sure to ask your doctor if there is anything you don’t understand about the procedure.

The Best Candidates for a Brow Lift

A brow lift is most commonly performed in the 40 to 60 age range to minimize the visible effects of aging. However, it can also help people of any age who have developed furrows or frown lines due to stress or muscle activity. Individuals with inherited
conditions, such as a low, heavy brow or furrowed lines above the nose can achieve a more alert and refreshed look with this procedure.

Brow lift surgery is often performed in conjunction with a facelift to provide a smoother overall look to the face. Eyelid surgery (blepharoplasty) may also be performed at the same time as a forehead lift, especially if a patient has significant skin overhang in the upper eyelids. Sometimes, patients who believe they need upper-eyelid surgery find that a forehead lift better meets their surgical goals.

Patients who are bald, who have a receding hairline, or who have had previous upper-eyelid surgery may still be good candidates for forehead lift. The surgeon will simply alter the incision location or perform a more conservative operation.

Remember, a forehead lift can enhance your appearance and your self-confidence, but it won’t necessarily change your looks to match your ideal or cause other people to treat you differently. Before you decide to have surgery, think carefully about your
expectations and discuss them in detail with your doctor. 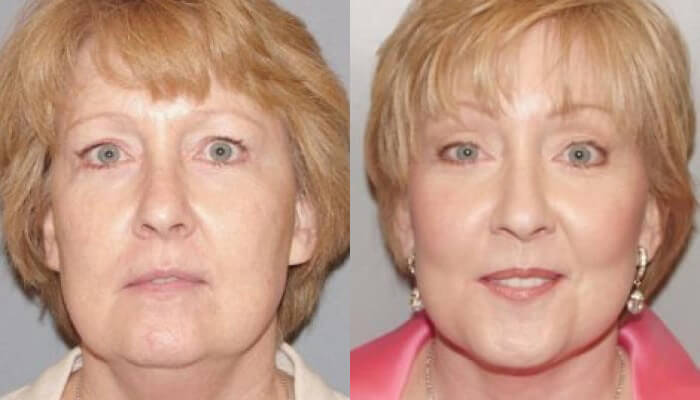 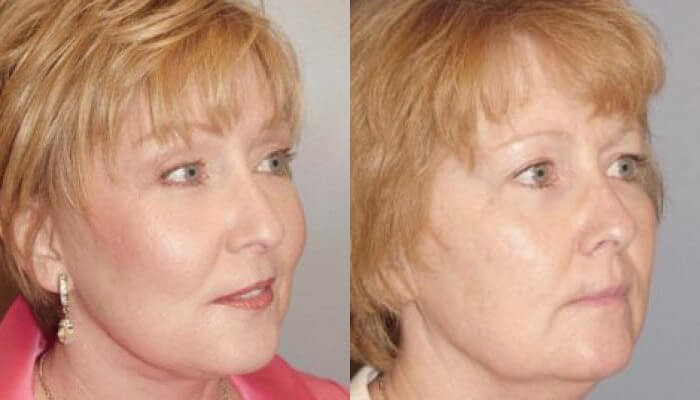 Before & After Photo Gallery

All Surgery Carries Some Uncertainty and Risk

Complications are rare and usually minor when a forehead lift is performed by a qualified plastic surgeon. Yet, the possibility of complications must be considered.
In rare cases, the nerves that control eyebrow movement may be injured on one or both sides, resulting in a loss of ability to raise the eyebrows or wrinkle the forehead. Additional surgery may be required to correct the problem.

Formation of a broad scar is also a rare complication. This may be treated surgically by removing the wide scar tissue so a new, thinner scar may result. Also, in some patients, hair loss may occur along the scar edges.

Loss of sensation along or just beyond the incision line is common, especially with the classic forehead lift procedure. It is usually temporary, but may be permanent in some patients.

Infection and bleeding are very rare, but are possibilities.
You can reduce your risk of complications by closely following your surgeon’s instructions both before and after surgery.

For a better understanding of how a forehead lift might change your appearance, look into a mirror and place the palms of your hands at the outer edges of your eyes, above your eyebrows. Gently draw the skin up to raise the brow and the forehead area.
That is approximately what a forehead lift would do for you.

If you decide to consult a plastic surgeon, he or she will first evaluate your face, including the skin and underlying bone.

During your consultation, the surgeon will discuss your goals for the surgery and ask you about certain medical conditions that could cause problems during or after the procedure, such as uncontrolled high blood pressure, blood-clotting problems, or the
tendency to develop large scars. Be sure to tell the surgeon if you have had previous facial surgery, if you smoke, or if you take any drugs or medications — including aspirin or other drugs that affect clotting.

If you decide to proceed with a forehead lift, your surgeon will explain the surgical technique, the recommended type of anesthesia, the type of facility where the surgery will be performed, the risks and the costs involved. Don’t hesitate to ask your
doctor any questions you may have, especially those regarding your expectations and concerns about the results of surgery.

Preparing For Your Surgery

Your surgeon will give you specific instructions to prepare for the procedure, including guidelines on eating and drinking, smoking, and taking and avoiding certain vitamins and medications. Carefully following these instructions will help your surgery and your recovery proceed more smoothly.

If your hair is very short, you may wish to let it grow out before surgery, so that it’s long enough to hide the scars while they heal.

Whether your forehead lift is done in an outpatient facility or in the hospital, you should arrange for someone to drive you home after your surgery, and to help you out for a day or two.

Where Your Surgery Will Be Performed

A forehead lift is usually done in a surgeon’s office-based facility or an outpatient surgery center. However, it is occasionally done in the hospital.

Anesthesia Used for The Procedure

All forehead lifts are performed under general anesthesia, in which case you’ll sleep through the entire operation.

Your surgeon will help you decide which surgical approach will best achieve your cosmetic goals: the classic or open method. Make sure you understand the technique that your surgeon recommends and why he or she feels it is best for you.

For most patients, a coronal incision will be used. It follows a headphone-like pattern, starting at about ear level and running across the top of the forehead and down the other side of the head. The incision is usually made well behind the hairline
so that the scar won’t be visible.

If your hairline is high or receding, the incision may be placed just at the hairline, to avoid adding even more height to the forehead. In patients who are bald or losing hair, a mid-scalp incision that follows the natural pattern of the skull bones
is sometimes recommended. By wearing your hair down on your forehead, most such scars become relatively inconspicuous. Special planning is sometimes necessary for concealing the scar in male patients, whose hairstyles often don’t lend themselves as well to incision coverage.

If you are bald or have thinning hair, your surgeon may recommend a mid-scalp incision so the resulting scar follows the natural junction of two bones in your skull and is less conspicuous.

Working through the incision, the skin of the forehead is carefully lifted so that the underlying tissue can be removed and the muscles of the forehead can be altered or released. The eyebrows may also be elevated and excess skin at the incision point
will be trimmed away to help create a smoother, more youthful appearance.

The incision is then closed with stitches or clips. Your face and hair will be washed to prevent irritation and the rubber bands will be removed from your hair. Although some plastic surgeons do not use any dressings, your doctor may choose to cover the
incision with gauze padding and wrap the head in an elastic bandage.

Classic forehead lift patients may experience some numbness and temporary discomfort around the incision, which can be controlled with prescription medication. Patients who are prone to headaches may be treated with an additional longer-acting local anesthesia during surgery as a preventive measure.

You may be told to keep your head elevated for two to three days following surgery to keep the swelling down. Swelling may also affect the cheeks and eyes– however, this should begin to disappear in a week or so.

As the nerves heal, numbness on the top of your scalp may be replaced by itching. These sensations may take as long as six months to fully disappear. If bandages were used, they will be removed a day or two after surgery. Most stitches or clips will be removed within two weeks, sometimes in two stages.

Some of your hair around the incision may fall out and may temporarily be a bit thinner. Normal growth will usually resume within a few weeks or months. Permanent hair loss is rare.

Incision site pain is usually minimal, but can be controlled with medication, if necessary.

The stitches or staples used to close the incisions are usually removed within a week and the temporary fixation screws within two weeks.

Getting Back to Normal

Although you should be up and about in a day or two, plan on taking it easy for at least the first week after surgery. You should be able to shower and shampoo your hair within two days, or as soon as the bandage is removed.

Most patients are back to work or school in a week to 10 days. Prolonged exposure to heat or sun should be limited for several months.

Most of the visible signs of surgery should fade completely within about three weeks. Minor swelling and bruising can be concealed with special camouflage makeup. You may feel a bit tired and let down at first, but your energy level will increase as you begin to look and feel better.

Most patients are pleased with the results of a forehead lift, no matter which surgical method was used. Often, patients don’t realize how much their sagging forehead contributed to the signs of aging until they see how much younger and more rested they
appear after the lift.

Although a forehead lift does not stop the clock, it can minimize the appearance of aging for years. As time passes, you may want to repeat the procedure.

How much does a Brow Lift cost in Raleigh?

The price posted to have a Brow Lift in Raleigh, NC, at our surgery center office is intended as a general guide to our actual pricing. At your consultation, Kristen or Laura will provide you a detailed individual estimate based on your surgeon’s recommendations.

*Fees generally vary according to patient needs and procedure combinations.
**These fees are averages only. They include the facility fee, anesthesia fee, and surgeon’s fee.

Our plastic surgeons have over 75 years of combined experience in cosmetic plastic surgery. If you’re ready to learn more about Brow Lift, please contact our office in Raleigh to schedule a consultation.